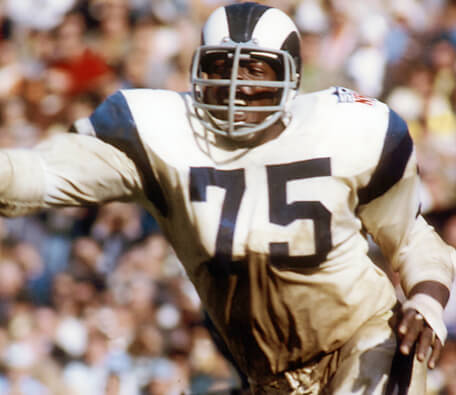 The player who invented the “quarterback sack”

As a football player and member of the Pro Football Hall of Fame, Deacon Jones is a household name throughout America. A fourteen-year veteran of the NFL, Deacon played for the Los Angeles Rams from 1961-1971, he was as a San Diego Charger from 1972-1973, and he finished his career in 1974 as a Washington Redskin.

In the world of football, Deacon is most well known as the man who coined the term “sack” and perfected the devastating “head slap.” He was a member of the most dominant defensive line the league has ever seen—the “Fearsome Foursome.” He was named the “Secretary of Defense” by Los Angeles fans, the “Most Valuable Ram of All Time” by the Los Angeles Times, and the “Greatest Defensive End of Modern Football” by Coach George Allen. He was named “Defensive End of the Century” by Sports Illustrated in 1999. He was unanimously voted to the NFL’s 75-Year All Time Team and was inducted into the Pro Football Hall of Fame in 1980, his first year of eligibility.

In 2008, the NFL listed Deacon as one of the Top 10 draft steals of all time. Add to that the many millennium accolades by sports media everywhere—he is a member of everyone’s top 100 players of all time—and it is easy to say that Deacon’s football career stands alone.

“Coming from a poor, inner-city neighborhood myself, I have an intimate knowledge of all of the problems people face there. It’s not just the inability to afford a good education that is a problem. Inner-city kids have to be prepared for college in every sense. For instance, kids from Beverly Hills grow up hearing about the stock market and real estate deals over the dinner table. When kids from the ghetto enter college and the workplace, they don’t know a thing about what they hear. And they are never told exactly what their commitment to their own neighborhoods must be.” — Deacon Jones

"Deacon Jones was one of the greatest players in NFL history. Off the field, he was a true giant. His passion and spirit will continue to inspire those who knew him."

"Deacon Jones was one of the greatest players in NFL history. Off the field, he was a true giant. His passion and spirit will continue to inspire those who knew him."
https://www.deaconjones.com/testimonials/bruce-allen/

"Even with his fellow Hall of Famers, Deacon Jones held a special status. He was an icon among the icons."

"Even with his fellow Hall of Famers, Deacon Jones held a special status. He was an icon among the icons."
https://www.deaconjones.com/testimonials/roger-goodell/

"In this day and age, the term 'great' is often overused, but it only begins to describe Deacon Jones as a player and person."

"In this day and age, the term 'great' is often overused, but it only begins to describe Deacon Jones as a player and person."
https://www.deaconjones.com/testimonials/kevin-demoff/

"Just to be in his presence, you felt like you were a better person just for being there in that moment."

"Just to be in his presence, you felt like you were a better person just for being there in that moment."
https://www.deaconjones.com/testimonials/warren-sapp/

"Deacon Jones is one of the absolute icons of the NFL…. He was bigger than life anywhere he went."

"Deacon Jones is one of the absolute icons of the NFL…. He was bigger than life anywhere he went."
https://www.deaconjones.com/testimonials/jack-youngblood/

"Deacon was a mighty guy and a wonderful man."

"Deacon was a mighty guy and a wonderful man."
https://www.deaconjones.com/testimonials/rosey-grier/
0
0
Deacon Jones Foundation

LARGER THEN LIFE, ON THE FIELD AND OFF

As a personality in both radio and television

Deacon was almost as well known for his humor, candor, charisma, and interesting and knowledgeable assessment of the game. He was known for “telling it like it is.” Deacon’s media and broadcasting credentials were numerous and included a range of venues, from countless television appearances on shows like “Up Close,” ”Hardcore Football,” “Monday Night Live,” and “Pro Magazine” to being a color analyst on the Los Angeles Rams broadcast team and an expert personality on Fox Sports Network’s “NFL This Morning.” Football fans loved the intimacy and behind-the-scenes insight that Deacon brought to the game. He appeared on virtually every television and radio sports talk show in both the U.S. and Canada.

Marketing, corporate imaging, and public relations were Deacon’s forte once he left the game. He worked for companies as diverse as the Miller Brewing Company, Hagar Slacks, Pacific Coast Medical Enterprises, and Epson America, and he represented the NFL and Champion Products as spokesman for their Throwback campaigns. He was in constant demand as a motivational speaker at corporate sales meetings and special events. Deacon was chairman for AstraiZeneca Pharmaceuticals in their national hypertension awareness program, “State of the Heart,” and he represented the NFL with their licensees and advertisers. He was a favored guest on all television and radio stations.

A LEGACY OF SERVICE AND SUCCESS

Deacon received numerous awards for community work, particularly his work with youngsters and youth organizations. In 1997 he founded the Deacon Jones Foundation, acting as president and CEO. The Deacon Jones Foundation was established to assist young people and the communities in which they live with a comprehensive program that included education, mentoring, corporate internship, and community service.

Deacon had tremendous respect for the U.S. military. Following a 2004 trip to Iraq to visit troops stationed there after 9/11, he gained a new and deeper understanding for what they accomplished and endured. To extend his gratitude and respect, Deacon joined forces with General Tommy Franks to pay homage and lend support to the families of military men and women who had been killed or wounded in action. He made several visits to wounded warriors in military hospitals and began a special effort, in conjunction with the NFL’s then-Commissioner Paul Tagliabue, to bring some of those vets to Hall of Fame induction ceremonies as his guests. Many were also invited as honored guests to Deacon Jones Foundation events, where they were introduced and thanked for their service and showered with gifts. This was Deacon’s personal way of honoring all of his nation’s armed services members.

In 2009, Deacon’s number 75 was retired by the St. Louis Rams at the Edward Jones Dome. In 2013, the National Football League established the Deacon Jones Award to honor the annual league leader in sacks. NFL Commissioner Roger Goodell announced the creation of the award—the first in the league’s history to be named for a player—at Deacon’s memorial service at the Los Angeles Coliseum, attended by scores of sports luminaries, colleagues, and loved ones. 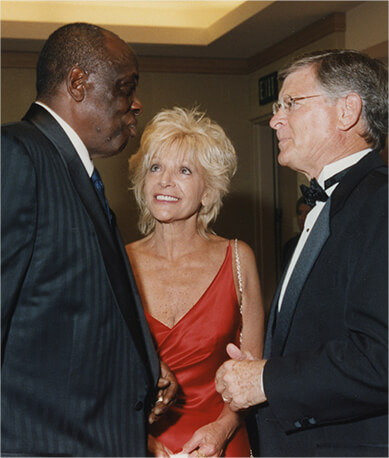