As the youngest of 8 children, Larry “Klu” Klukaszewski had many role models growing up. His father and two older brothers, all athletes, helped him to fall in love with sports. Additionally, his mother and sisters who would encourage him to sketch for hours as a youngster as a way to wind down after running and playing. It became a natural progression for Larry to begin drawing and painting his favorite sports heroes when he wasn’t imitating them on the street or practice field. At the age of 11, “Klu” mailed a favorite drawing to a professional athlete in Pittsburgh, and was floored when the athlete returned the sketch complete with a complimentary message and autograph. “That was like a dream come true for me,” remarked Larry. “I knew then that I wanted to continue drawing and painting these heroes of mine for the rest of my life.”

Larry’s background in sports and art led him to play college baseball and pursue education. Having led an athletic life has enabled him to incorporate much intensity, power, and passion into his art. It is this same passion that Larry tries to pass onto his students, on a daily basis, in his elementary art classes. “I believe that all children can create, and it is an honor and a thrill to help them achieve success with their art.”

As a professional sports artist, Larry has been blessed to have created commissions for many professional athletes, past and present, including a Heisman winner, a Super Bowl MVP, and an NFL MVP. He has shown nationally at the National Art Museum of Sport in Indianapolis and has contributed to numerous charitable organizations via his artistic works. His work can also be seen at Heinz Field, home of the Steelers.

Having become involved with the Deacon Jones Foundation is an amazing way for Larry to continue using his skill as an artist to help those in need. “I am humbled, honored, and thrilled to be among so many talent artists in this very remarkable endeavor.” 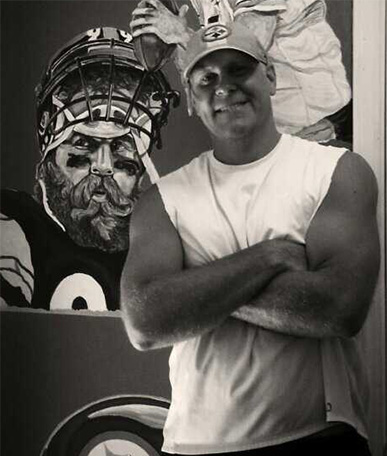