Robert is an artist from Whitehall Pennsylvania who uses colored pencil, graphite, acrylic and airbrush to achieve the highest level of realism in his Sports paintings. His father, a sign painter for over forty-five years was a tremendous influence of his art. In Robert’s first sports drawings he used sports cards and pictures from magazines as reference to sketch his favorite athletes.  As he became more serious about the craft he wanted to address the finest detail in his work so he began combining various art media in his drawings and paintings.

Sports have always been a huge part of Robert’s life.  As a former Division two college football player, he has experienced everything sports have to offer.  He knows that it takes a tremendous amount of hard work, dedication, and love for what one is doing in order to be successful at it.  That is why he sometimes invests over one hundred hours into his photo-realistic artworks.  Whether it is an intense stare or the grace of an athlete running in full stride, his artworks attempt to bring that specific moment to life.

Clients of Robert’s include the TOPPS Card Company, the Phoenix Suns, many athletes ranging from high school to professional, and several foundations which he helped raise money for charity. He currently teaches advanced high school art classes and is accepting commissions. Robert is honored to be a part of such an established and talented group of artists and help the cause of The Deacon Jones Foundation. 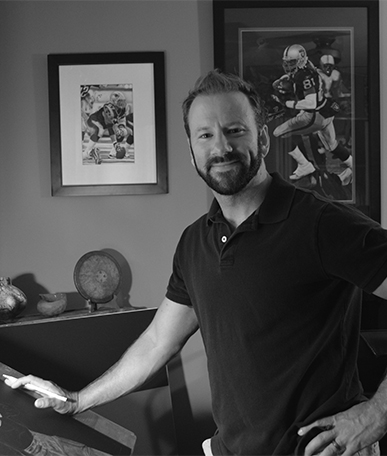