There is a truth to Alvin Fall’s images of athletes in motion – a clarity in his distilled expression of their skill, concentration, fear, joy, fatigue, pain, excitement, bravery and camaraderie – that brings an instant to life in sharp, three-dimensional relief. The images sizzle and bristle on the page, packing a game’s worth of emotion into a single moment. “That passion, that moment – that’s my motivation,” Alvin reveals.

Three events and influences informed Alvin’s rise as an artist – his mother teaching him to draw and paint at a young age, his father sharing the vivid history and passion for football through his NFL Films collection and Alvin’s dedication to the Denver Broncos, a team that dominated the rugged landscape of his childhood home in Loveland, Colorado.

In the street with his cousins, on the playground at school, at his grandmother’s farm, Alvin tossed a football, kicked it, tackled and dove for the ultimate catch, then captured all those images and feelings on the page in Technicolor. This natural blend of football and artistic ability in a child’s unbounded imagination helped form the foundation of who Alvin is today.

“The NFL athletes I watched on the field every Sunday and the men who were featured in our NFL Films library became heroes to me. I idolized them as a kid and I still do today,” says Alvin.

With a vivid imagination and a burgeoning artistic talent, Alvin excelled in both art and football and, after making All-State First Team honors as a senior wide receiver in high school, he became a freshman walk-on at Missouri Southern State University.

As a player, Alvin knows the highs and lows of 60 minutes on the field, and has honed his unique storytelling ability through hard graft. Not only did he study the human form in life drawing classes at college, where he majored in Graphic Art/Illustration, but he is also a licensed physical therapy assistant. It’s this blend of medical and artistic knowledge of human anatomy that makes his color pencil-and-watercolor renditions so powerful and evocative.

“I challenge myself to produce artwork that is not only precise in detail and composition, but worthy of representing the athletes I portray,” the Sarasota, Florida-based artist says.

Over time, Alvin’s style has evolved: “My style used to be very tight in college; I was trying to be photorealistic. I realized I needed to loosen up and let my perspective in.”

In addition to commissions hanging in private and public collections, Alvin has been honored by the Scholastic Press Association with its “Outstanding Artist” award (2001) and was invited to participate in the Olympic Art Competition for the 2008 Summer Games in Beijing, among many other accolades. Alvin has been commissioned by the Tampa Bay Rays professional baseball team and college football teams, including the University of South Florida Bulls and the Arkansas Razorbacks.

“I want people to see my artwork and remember exactly what type of player the athlete had been. Remember how they wore their jersey. What type of face mask they wore. The grass and blood stains from battling in the trenches. The look in their eyes. The posture they had when making a cut. All those little details that tell the story of your favorite player. That stuff is gold!” he says, continuing, “Each one of my illustrations is special to me. They are extensions of my life, of my memories, of my being.”

Alvin Fall is excited and humbled to have been selected to join the artists in the Deacon Jones Foundation collection. 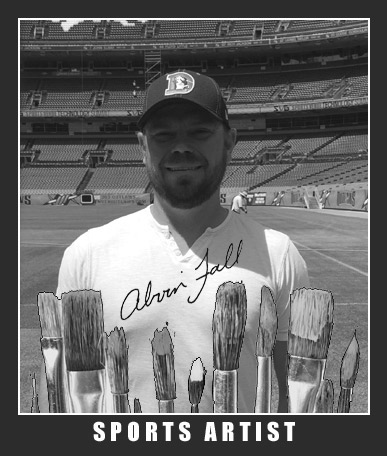