Born in the small town of Springfield, KY, Don currently lives in north east Pennsylvania. Comic book art and the paint by numbers system cultivated his interest into the world of art. He immediately discovered his talent to draw when he started drawing from the comic books freehand.

Don’s love for the arts grew alongside his passion for football. He started playing football at an early age when he was just in elementary school where he immediately started playing running back for the Washington County Elementary Commanders. His love grew enormously for the game of football playing pickup games with his gang, and he credits the gang for his passion and success in football. Don continued to play football throughout his freshman year in high school continuing through J.V and varsity, and later moving to North East Pennsylvania where he later played semi-pro football for the Pocono Mountaineers and the New Jersey Oaks football clubs. An avid weightlifter, he also experimented in some powerlifting during the late 80’s and early 90’s winning several awards and trophy’s.

Don’s journey to college found him taking art classes at East Stroudsburg University, The University of the Arts in Philadelphia and eventually getting his degree from The Art Institute of Philadelphia majoring in Animation and Media Arta. 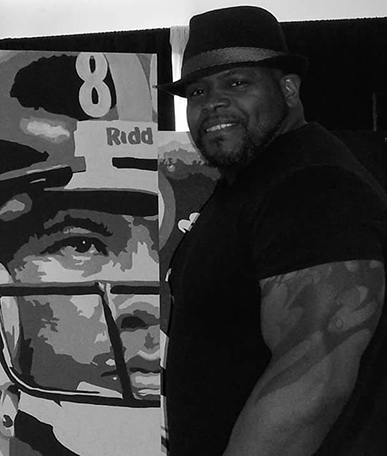