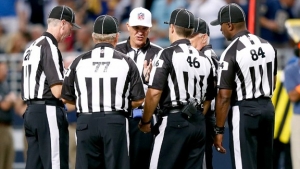 Back in 1998 when Deacon wrote this in an article for Tuff Stuff Magazine, the NFL boasted a roster of 113 officials, including attorneys, bankers, real estate agents, two dentists, and one podiatrist–“a perfect mix to judge a football game, although a butcher and a fireman would be nice too.”

“Officiating-wise, 1998 will be known forever as one of the NFL’s worst seasons.”  There was the “called tails” controversy during a game between the Detroit Lions and the Pittsburgh Steelers, a first down given to New England’s Shawn Jefferson on November 29th on a play where he was undeniably out of bounds, Vinny Testaverde’s winning “touchdown” against the Seahawks on December 6th when he never even made it to the end zone.  Then there was the Packers/49ers game on January 10th when Jerry Rice clearly fumbled late in the game but the refs missed the call and the 49ers were able to win it in the fourth quarter drive.  And what about the  Hail Mary pass that won the game for the Ravens against the Chargers on November 15th, even though the Ravens had 13 men on the field, and the list goes on and on and on.

To say that Deacon was never a fan of the referees is an understatement.  His own Los Angeles Rams lost a crucial game in 1967 because the officials lost a down–an entire down!  The Rams didn’t even realize it until they watched film of the game the following day, but back then no one was permitted to criticize the officials in public, so all you could do was suck it up and hate their little guts forever.

With instant replay and a good conscience the League has tried to clean this up, so here is what you need to be an NFL official today.  If you have 10 years of experience officiating and at least 5 of those years are at a varsity college or better, you are in excellent physical condition, and you belong to an accredited officials association, on any given game day you too can put on a striped shirt and pick up some serious money as a ref in the NFL.  And even better than that, you can take it out on any team or anybody who is a threat to your favorite franchise and no one will blame you for it.   .