THIS DAY IN HISTORY, A STAR WAS BORN

Home/Deacon Jones Foundation/THIS DAY IN HISTORY, A STAR WAS BORN

THIS DAY IN HISTORY, A STAR WAS BORN

December 9, 1938–This day in history, a star was born.  Today, December 9th, is the birthday of my beloved husband, David “Deacon” Jones.  I was up all night thinking about what I should say about him to our friends and to his fans.  There is so much that I could write, but I think that everything can be summed up in something he said to me just before he passed away on June 3, 2013.  He had been quiet and pensive most of the day, and then he took my hand and said, “You know something, Baby?  All I’ve ever been is a football player.” 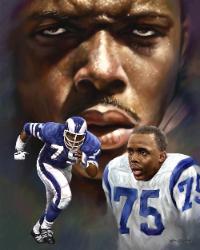 Over the years so much has been written about his career in the NFL, and he had done so much in his life, both during and after football.  He owned and operated many of his own businesses, was a spokesman for the NFL and for corporations, appeared in countless television shows and commercials, gave unbelievable motivational speeches, was everyone’s favorite interviewee, was a broadcaster and football analyst on radio and TV, developed his own charity and worked diligently for so many others, and the list goes on.  But at the end of the day, at the end of his life, he defined himself only as a football player, because that was what he truly was, and that was what he loved with all his heart.

He was a very private, public man, and those who had the good fortune to know him or just to meet him will never forget that Cheshire Cat smile and his twinkling eyes, his raspy voice and booming laugh, his humor, his charisma, and his intimidating yet delightful presence.  He was, is, and always will be a legend of the NFL, and he will always be remembered as the consummate football player forever.