WHO SAYS THE PASS-RUSH IS DEAD?

WHO SAYS THE PASS-RUSH IS DEAD?

Who says the pass rush is dead?  The past couple of weeks sports broadcasters have been saying that the pass rush is dead and it is now all about pressure.  What are they talking about and what do they know?  The goal has always been about pressure, and the Sack is a result of that.  Anytime Deacon was ever asked about Sacks, and that was all the time, he would repeat that again and again.  Every down, every 30 seconds, the defense needs to pressure the quarterback, mess up his plans, force him to readjust, make him never want to come out of that pocket, and scare him to death.  And, yes, knock the air out of him and hit him for a loss every time you can. 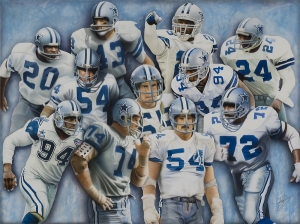 I have to admit that over the past couple of weeks it not only looked like the pass rush was dead, it looked like there was little defense at all.  With scores like 41-38 between the Panthers vs Saints, and 42-39 between the Titans vs Jaguars, the NFL was beginning to resemble the CFL instead.  If you’ve never watched a CFL game then you should know it is like watching a tennis match—you get the ball, throw it down field and score, they get the ball and throw it down field and they score, all day long.  With different rules and end zones that are 20 yards deep, all they need is a quarterback with a strong arm and a running back with some speed and they have a game.  Defense is non-existent.

Last night, however, the Dallas Cowboys proved that good old fashioned pass rushing is alive and well in the NFL.  Starting the game with a four man line, they pressured Kurt Cousins and the Redskins for the entire game, winning it with a score of 19-16.  Now that’s much more like the defensive football I know and love.  They may not be the Dallas Doomsday Defense of the 1970s, but my hat’s off to them, and defense (and the pass rush) is alive and well.